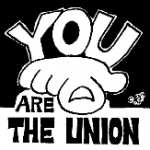 All CUPE members work under the protection of a contract called a Collective Agreement. Your local Union bargains the terms of the agreement. Elected local union leaders also work with the employer to resolve problems in the workplace.

If you have questions about your rights at work, the best person to talk to is your steward or local executive. They will know the specific details of your agreement.

If you would like a paper copy of your collective agreement, please go to the school board website and locate Cupe 1310 Collective Agreement and print off a copy if you need help locating this please speak with your steward. If you don’t know who your steward is, or how to reach your local, please click on the Cupe 1310 Executive Contact information tab, or refer to the Cupe 1310 Executive Contact Information list that was provided to all Cupe employees by the board.

UNDERSTANDING UNION DUES
Union members set their dues’ level democratically at a regular membership meeting, a special membership meeting, or by referendum. Union dues support the work of the union. They fund the cost of bargaining. They allow the local to enforce
its collective agreement, and they support campaigns to defend and promote workers’ interests.  No single worker could afford the cost of taking
a grievance to arbitration. No worker could survive a strike or a lockout without strike pay. Union dues also help workers create their national strike fund.
In Canada, union members pay dues based on a fair system called the Rand Formula.
What is the Rand Formula?
The Rand Formula refers to an arbitration case decided by Justice Ivan Rand in 1946. The case involved a United Auto Workers’ strike at a car
factory in Windsor, Ontario. The Rand Formula is also known
as “dues check-off” The court decision recognized the union as the
bargaining agent for all workers at the plant. The judge ruled that union dues should be paid by all those who benefit from a union contract, not just
by those who signed up to join the union. The result of this legal ruling—and others that followed—was that employers would deduct dues from all unionized employees’ pay, and forward the funds to the union. Known as “dues check-off,” this system is used in most provinces. It means that a local can bargain to include dues check-off in its collective agreement.
What is the value of the Rand Formula?
It makes it legal to have automatic dues check-off from all workers covered by
a collective agreement.  Without the Rand decision, and where dues check-off does not exist, unions must go to each union member each month to collect dues. The Rand decision means that unions have the financial stability to focus on the work of representing members instead of having to collect money to support that work.
INCOME Monthly Union Dues
Union dues from members are the main source of income for your local. Dues make it possible for locals to cover their per capita payments, affiliation fees, operating costs, and costs for arbitration, negotiation and attendance at conferences or conventions. It also helps locals save money for hard times.
The employer automatically collects union dues through pay deductions -a practice known as dues check-off. The employer then forwards the dues to your
local once a month. Some locals choose direct remittance of union dues. If your local uses direct remittance, the employer sends the dues to CUPE National.

In rare cases, members of a bargaining unit can choose not to join the union.

These employees are referred to as Rand Formula payees.
• They pay union dues and are covered by the collective agreement, but they do not pay the initiation fee.
• The union represents them in grievances and arbitrations.
• They can participate in ratification and strike votes.
• They must not participate in any other union functions.

Dues Remittance List
Once a month, the employer needs to provide your local with a dues remittance list. This is sometimes called a dues check-off list. Its purpose is to make sure that your local is getting the correct amount of union dues each month.  This list should include each member’s name, employment status (such as full-time, part-time, temporary, or casual), classification or job title, regular earnings, hours worked, and dues deducted. An electronic spreadsheet makes it easy for you to double-check this information.

The Move to central bargaining

Twenty years ago, education was funded primarily through locally-raised property taxes, and most CUPE locals bargained directly with local school boards. This funding model started to change in the 1990s when provincial governments across the country began amalgamating school districts and centralizing education funding, prompting a corresponding shift towards province-wide bargaining.

In 2019, CUPE education workers in Ontario negotiated their first central agreement as the Ontario School Board Council of Unions (OSBCU). Facing a hostile Conservative government which had already implemented public sector wage restraint legislation, the OSBCU mobilized its 55,000 members across the province to put the issues of understaffing and workplace violence at the forefront of negotiations. The OSBCU fought off major concessions while negotiating mandatory paid training on violence prevention, renewed job security language and $78 million to fund the reinstatement of 1,400 jobs.

In addition to their province-wide mobilization for bargaining, CUPE education workers in Ontario demonstrated their solidarity with Ontario teacher’s unions as they engaged in rotating strikes throughout the province in early 2020.